It is often normal to see bruises in children, especially once they 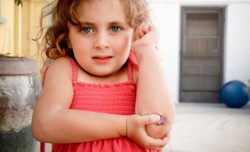 become increasingly mobile and active. It is part of every childhood, as it is part of play. It is in fact very common that most children will probably forget when or how they got their bruises. Parents should often not raise alarms with regard to bruises. However, most parents may ask when “normal bruising” still is considered normal and when does bruising connote to a more serious condition? There are certain factors parents have to observe for to tell that the bruises in a child denote a disease or a call for alarm.

Causes of Bruises in Children

As part of children’s play time, actively moving around can cause direct blow to the skin leading the blood vessels to rupture and cause a purplish black spot on a child’s skin. The bruise will turn greenish-yellow as the blood seeps is reabsorbed by the body. Some of the most common causes of bruises in children include:

When to Expect Bruises in Children

Multiple small bruises on the front of the legs are common in active children. Bruises also tend to show more in fair skinned children.

When to be concerned with Regard to Bruises in Children

Some children naturally bruise more easily as compared to other children in their age. However, there may be a need for concern when these factors are noticed in children with bruises:

How to Treat Bruises in Children

These hints should not be used as medical advice or substitute as first aid training. Furthermore, excessive bruising in children may be a sign of a blood disorder or even child abuse. To learn how to recognize symptoms and treat bruises in children, enroll in first aid courses offered by workplace approved.