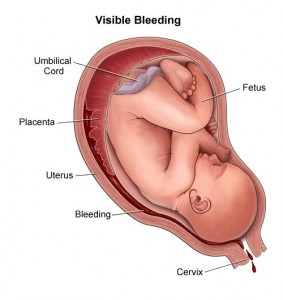 Vaginal bleeding during pregnancy is often scary but it does not necessarily mean that there is trouble. Most women who experience vaginal bleeding at any point of their pregnancy often deliver healthy babies. However, it is still essential to seek medical care at all times. When there is a blood discharge from the vagina, it could mean many things, especially if it were either in the early or later stages, which will be further discussed later in the article.

Vaginal bleeding can occur any time during the pregnancy from the moment the egg is fertilized to the termination of pregnancy. It is, however, important to know the difference between spotting and bleeding. The former pertains to a few drops of blood on the underwear every so often. But the amount is very little that it does not cover a panty liner. Bleeding, on the other hand, refers a heavier blood flow. Spotting may not always be a medical emergency but it should still be reported to the doctor.

Causes of Vaginal Bleeding during the Different Trimesters

Aside from the obvious bleeding from the vagina, several other symptoms usually accompany vaginal bleeding, which include:

*Always seek for medical advice if one experiences vaginal bleeding during pregnancy.

It is important to manage bleeding during pregnancy treatment. The

following steps are not meant to be substituted for medical advice or first aid training. Enroll in first aid courses to learn more on how to treat medical emergencies with pregnant women.

Seek medical advice for any type of vaginal bleeding during pregnancy.